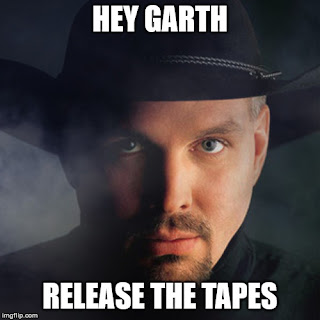 Time has come for country singer Garth Brooks to
release the tapes. The public have waited long enough
now and for Historical purposes the tapes have to be
released.

Yes Garth is extremely busy and has several products
due out in the next 12 months that he is concentrating on,
the public understands this, the public though  wants and
deserves to have the tapes released from Garth's master vault.

Garth fans are being extremely spoiled over the next 12 months,
we have "Legacy 1" coming out this year, along with the new
studio album "Fun" and his "Triple Live" album,  and in 2020
we will have the "Diamond Series" "Legacy 2" and of course
another chapter in the Anthology series.

What is far more important though, than his Legacy and
Anthology series, all of which by the way should've included
the tapes,  and those tapes are the tapes from his Master Vault,
they have stayed hidden from the public and THE  media for his
entire career.

So what is on these tapes and why is it important, and why
does Garth Brooks have them locked up tighter than Fort
Knox.

First off the tapes include.....

Video Footage of every concert he did outside the USA/Canada
on his 1994 world tour.  Pre/Post footage and the entire concerts themselves.

Video  Footage of several concerts he did in the USA 93/94 outside
of his TV specials, also Pre/Post footage and the entire concerts themselves.

The concerts were filmed and recorded by Crazy Duck Productions/
The Dream Chasers and Garth's own people.

Garth has all the footage (over 200 hours from The Dream Chasers
alone) locked up in his master vault.

It's important because it shows the true passion from him and his
fans, the complete crowd frenzy, the uncontrolled mania from fans
at his concerts, it shows the Rawness of Garth as a performer that
you just cant get from a TV special that is edited cut and sliced.

Think, This is Garth Brooks One, and times that by a 1000, its the
reaction from  the crowd that is losing it's sh*t from seeing their
idol, it's Garth himself being totally spontaneous and losing himself
in his performance without worrying about what the reaction from
a TV audience might be.

It's showing another side of Garth that you have never seen from
any TV special any boxset/collection/Legacy or Anthology, it
may even be shocking for some to see, it's this footage that
shows Garth as the true entertainer the true showman, at his
peak.

Don't get me wrong, the made for TV specials blows me away,
but they're just that, made for TV, his true heart, his true ability
when he is on stage, is that he is always in the moment.

His concerts he has done since coming out of retirement, are amazing
from the footage I have seen, they're different, he is still a
brilliant performer, as Garth has said though, he is now very careful
on stage because he knows everything is going to be filmed.

I think Garth is very protective of his legacy, his imagery and he
does like to control what is out there. As a life long fan though,
I think Garth needs to be a bit more braver and not just rely on
four TV specials to defined him as an entertainer. He needs to
open up the vault and say to the public "Ya think ya know what a Garth
Brooks concert was like in the early 90's, well think  again!"

Garth needs to be brave, he needs to go into his master vault, he
needs to Unleash all this unseen footage for the public and music
historians, so we can have a complete picture of his career.

The time is right.  Dig deep Garth, ya gotta do it.

Its time for Garth Brooks to... 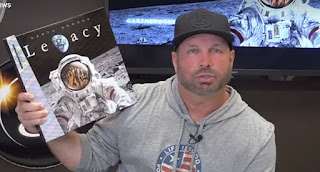 What he has done since coming back in 2014 is nothing
short of phenomenal. Breaking every Arena and Stadium
record is unheard of in a comeback tour.

His treatment of his fans is so sincere and sweet, no
one has ever came close in their relationship with their
fans than Garth Brooks.

So we are at the stage where we are talking about Garth's
Legacy on the eve on him releasing a Vinyl/CD boxset
called Legacy.

And thus we get to the only negative  part of Garth Brooks's
career and that is, part of his legacy is rehashing old music.

By putting the same songs in a different package/Collection/
box set, would seem to be done in the hope of boosting
his already Massive  RIAA numbers and increasing his
position at the top of Soundscan and their numbers.

For myself the Live Anthology released last year was a
miss opportunity, he could've given the fans countless
hours of  footage from his early days of touring
the USA and touring the world. Instead the multimedia
part of that package was Double Live (released in 98)
and the just released at the time, fan mix of Triple Live.

So we come to the Legacy package, Garth on Vinyl in
three separate boxsets with CD's of the albums too! We
were promised Bonus songs, and that is what got fans
really excited, unfortunately with  Amazon releasing a Pic
of the Discs, the Bonus songs, are the same Bonus Songs,
that he called Bonus songs  in 1998's  Limited series.

It's frustrating knowing that Garth has recorded over 15
thousand songs in his career, that he has way over 200
Hours of concert footage from the early years and he
has never bothered to released any of that.

When he makes an announcement about releasing material
and calls it "Bonus Material" it's always been material
we have either seen or heard before.

How many times can fans buy the same music over and
over or buy DVD's from the same TV specials, while
knowing Garth has in his master Vault, hundreds of
hours of unseen footage from unseen shows.

Now that Garth is an older artist, his Legacy is being talked
about and what pops up, is the amount of times he has re released
the same CD's.

This for me is effecting his Legacy and until we get the
complete package of unseen/unheard material from Garth,
it will continue to effect his Legacy.

Hopefully one day he will open up his Vault for the world
to see.

Time will tell.
Posted by A Blogger at 10:05 PM No comments: