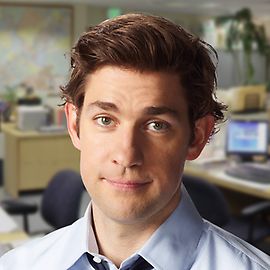 Just wondering, if Jim Halpert from The Office
wasn't good looking could the writers made him
believable as the nice guy.

Female fans of the show, wrote on message boards,
what a nice guy he was, and how they wished they
had a boyfriend like Jim.

The going up to Pam's desk wouldn't be called flirting
it would be called Harassment, the pranks on Dwight
would be called Bullying, and the cruel pranks on
Andy would've made Jim the most hated person
on tv.

How also would've they written Pam's reaction to
what Jim does??

Think for a second, if Jim was played by someone that
looked like Kevin, it wouldve been perceived to be
creepy.

So why do these good looking guys in roles on television
seem to be applauded when they bully and harrass, but
the exact same behaviour is hated if played by a actor
that looks like Billy Bob Thorton?

There have been many pieces written on Jim Halpert and
how he is a sick sociopath who bullies and torments, yet
the female fans of the Office, always called him a nice
guy, Why? Is it just the looks thing?

Can someone explain it to me?
Posted by A Blogger at 10:24 PM No comments: