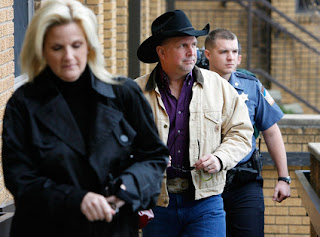 Gotta feel for Garth Brooks at the moment,  to donate
money to a Hospital thinking they were going to name
awing after your mother who has passed on, only to
find that they have taken the money, but didn't name
the wing after her, must be gutting.

What can one say, it would appear the good nature
of Garth Brooks has been taken advantage of, this
man has done a ton of charity work, he is always
hands on, his recent work in rebuilding homes
in Haiti  was amazing, he certainly doesn't just
lend his name to causes, he does the work.

Fans have been outside the courthouse, I
kinda think they should let him go through
this without having to be on, though.

So it sad when all this happens, let hope the
court decides in Garth's favour.