There are rules for Blogging? 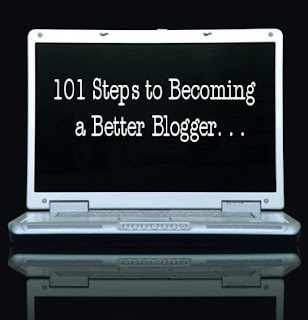 According to an extreme left wing New Zealand blog, there are rules for blogging. I never knew this, I just thought there was one rule, no plagiarism.

But alas, there are rules according to them. You cant reveal sources , and since I don't have any, that one should be easy.

Even putting ads on your blog isn't right according to this site. I have to disagree, if you can make a few extra bucks, why not? Although I haven't made any extra bucks myself, I still think its a good concept.

What these bloggers have to realize is, that with the Internet unlike the mainstream media, there are no rules, you can blog about who you like, and if your a blogger your not a Journalist, that is an insult to anyone who has studied journalism.

The only problem I have with some bloggers is they put themselves on such a high pedstal and think there are rules to what they do, with blogging there shouldn't be rules, because blogging is just someone's random thoughts and you cant put a rule to a thought.
Posted by A Blogger at 7:08 PM No comments:

What is wrong with TVNZ? 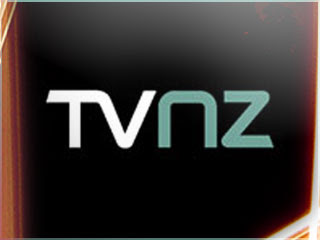 Why would any news network, put on a smart ass ten year old kid who stole his parent's car, drove it at double the speed limit and then have a reporter, ask him, "How fast did you go?"

They interviewed him behind the wheel of his parents car and basically made him out to be some sort of anti hero, the kid was getting off on it.

Hasn't anyone told the journalist that you don't bring attention to misappropriate behavior. This kid will now be bragging to all his mates, how he was on TV and will probably do it again. The next time he does it, someone might get killed, something to think about, huh TVNZ.
Posted by A Blogger at 7:05 PM No comments: 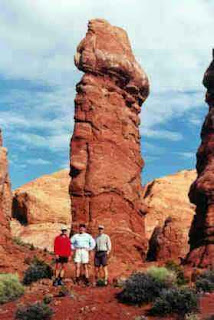 Found this pic at the DU.
Posted by A Blogger at 5:56 PM No comments: 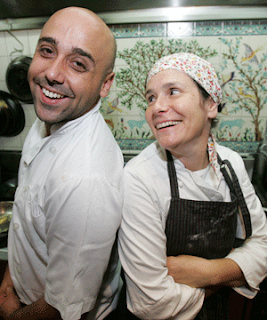 They both run a cafe together, one is a Israeli the other is a Palestinian. They meet while studying and decided to run a business together.

If only more people have their attuitde, then New Zealand will be a better place to live.

They must be on the shortlist for Kiwis of the year.
Posted by A Blogger at 3:15 PM No comments:

UFO spotted at Obama's swearing in 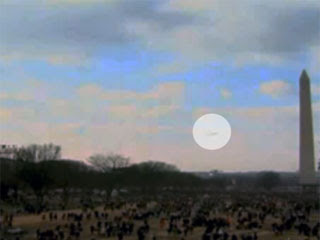 I'm not convinced myself.
Posted by A Blogger at 9:39 PM No comments: 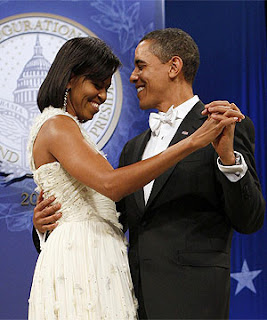 Has a nice ring to it. The world has its fingers crossed that Obama can bring his change to the world, he has such high expectations on him, people aren't expecting a mediocre president, they are expecting something special, can he live up to it? 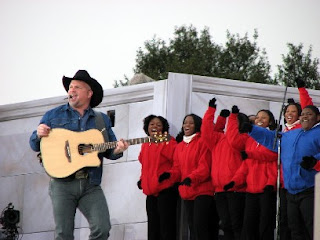 Was there any doubt?

That the greatest entertainer in USA history would steal the show, the crowd had already been pumped, but when Garth started singing "Shout" the whole atmosphere turned electric, he had everybody including the Obama's dancing and clapping, he was backed by a delightful children's choir, and showed even in retirement, there is no one who can touch him or is more respected over all genres as a showman.

As always he did country music proud, and he did Obama proud, an all round solid performance, he looked as excited as the crowd did, which got the crowd going even more.

There is a reason why Garth use to sell out concerts in minutes, no artist can move a crowd to a frenzy like he can, and to do it in front of a non country audience is something special.

Well Done Garth.
Posted by A Blogger at 2:26 PM No comments: 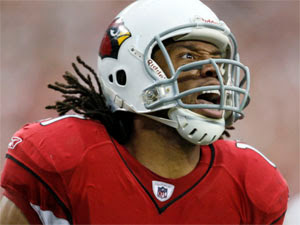 THANK YOU FITZGERALD, THANK YOU HIGHTOWER, AND MOST OF ALL, THANK YOU OLD MAN WARNER, NEVER THOUGHT I WOULD SEE THIS DAY IN MY LIFE TIME!!!!!
Posted by A Blogger at 1:02 PM No comments:

The Hypocrisy of Feminists and Peace Groups in New Zealand 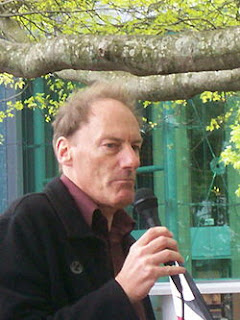 Hypocrisy (or the state of being a hypocrite) is the act of preaching a certain belief, religion or way of life, but not, in fact, holding these same virtues oneself. For example, if a person were to tell one to repent for his sins yet he never repents himself this is hypocrisy.
In other languages, including French, a hypocrite is one who hides his intentions and true personality. This definition is different from that of the English language.
With what has happen in New Zealand over the past week, I will NEVER EVER trust another peace group, the green party, activist, or anyone who says they are for human rights for all again, because people who say this are lying, they are not being honest.
When I first read of the horrible story of two poor Israeli woman who became a victim of one man's racist form of apartheid in Invercargill, I thought maybe these groups will come out and support a couple of people who have become victims of a bigot.

You see nearly every day, The Green Party, Peace Action New Zealand, Global Justice for Peace and blogs such as The Hand Mirror and The Standard are telling us peace and love is the way.
If there is injustice the Green party will be there, if a woman is deemed to have been wronged by a businessman, the hand mirror will write about it.
Except it seems if the racist bigoted person is a Muslim, and his victims are Israeli woman, they just shut up and say nothing.
What can one take from this? Well its pretty simple, blogs such as The Hand Mirror and The Standard couldn't give a fuck about a woman's rights, Peace action New Zealand couldn't give a fuck about Peace, John Minto and The Green Party are nothing about Justice for all people.
They all have such hate for the west and capitalism and cannot stand that most of the planet don't want to be socialists and communists, so they try to turn people towards their ideas by using peace and human rights as a disguise.
I can't understand how anyone can respect these groups, to be a racist is bad enough, but to be a hypocrite with it, well it doesn't make you much of a human being does it?
Posted by A Blogger at 6:40 PM No comments: 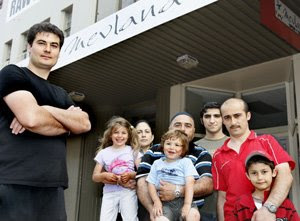 How is this not Apartheid??? How can this be legal in 2009 in New Zealand?

The silence from the likes of Keith Locke and John Minto is deafening. Can you imagine what would happen if an Israeli cafe owner refused service to two Muslim woman from Gaza, various so called peace groups would be protesting outside 24/7, chanting SHAME SHAME

Instead, they say nothing, they should be ashamed of themselves for their silence.

So call woman right's blogs such as The Hand Mirror and socialist blogs such as the Standard are normally jumping on stories when there is injustice for woman or minority groups, on this occasion they say nothing, that is so hypocritical, how can they say they are for equal rights and peace, here is a man kicking out two woman because they are Israelis , its disgusting and hopefully this cafe will be closed down shortly.

I guess you can be a bigoted racist pig as long as your a Muslim, welcome to the world of peace protesters/human rights activists and left wing bloggers.
Posted by A Blogger at 6:47 PM No comments:

Hey Duncan Johnston, wake up and notice a real hero 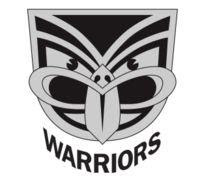 On two many occasions, the New Zealand media throws the word hero about. It doesn't matter if someone is a hero or not, they sling the catch phrase "He's a hero" about, no matter if it's true or not.

So this post goes out to members of the NZ Media, just to clarify things.

If a sportsperson tells seven members of his family to get out of the water because there is a dangerous rip and then swims out to rescue his brother, and loses his life, then he is a hero.

Sonny Fai is a hero, he gave up his life to save others and that is what makes a hero, putting your life at risk for the benefit of others, too often the media think its something else.

Well done to Fai, lets hope there is a special mention of him at Halberg's, he deserves it, because he is a hero.
Posted by A Blogger at 7:39 PM No comments:

Worst New Zealander of the Year 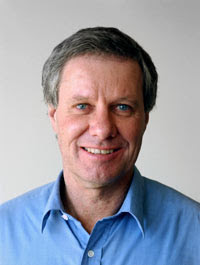 If Locke and Minto and groups such as Peace Action New Zealand are really for peace, and that is their only goal, how come they just shut up and say nothing when Hamas fires rockets towards Israel or someone straps a bomb to themselves and blows up a Jewish kindergarten??

How come they also organize protests where people burn the flag of Israel or American?

Can you imagine the outcry from the green party if a bunch of Americans started burning the Iran Flag in protests in downtown Auckland to protest what the Iranian government does to its people, and what it wants to do to the West.

How come there is no comment on how Hamas thinks Israel doesn't have the right to exist?

How come these peace protesters never protest if a capitalist country is the victim of Terrorism?

Why did Locke snigger and make excuses for 9/11, why wasnt he outraged at this horrific event?

Two days after 9/11why did a so called peace group in Christchurch, tear down a memorial and replace it with banners saying "This is all America's fault" and why would this peace group have posters in their town office that says "the Holocaust was a Jewish lie" This is the same peace group that has in the past had Locke as a key speaker.

But back to Hamas, the left may say, well Hamas has only manged to kill a few people, but of course they know if they had the capability they would wipe Israel off the map, but what does Locke and Minto say about that, well they just SHUT UP, while telling others to shut up.

What happened this week in New Zealand was repulsive, to protest a young 17 year old girl, when she is away from home is a form of child abuse, and there is nothing courageous about it.

Minto and Locke are not about peace, if they were genuine peace protesters, then any form of violence from any Government would met with a protest, they are really anti western and anti capitalist protesters (just take a look at the New Zealand communist part banners at their protests), to use a so called peace march to push their own political point of view is despicable.

I'm not sure what to call these guys, they are of course hypocrites and extremely racist, and the hatred that comes from Locke's mouth is downright scary, thankfully they also seem to be obsolete, only managing to get a handful of protesters to come along to their protest.

I guess that is what you get from a bunch of people who want to invite terrorists to live in New Zealand.

IMHO they are tied for the worst New Zealanders of the year.
Posted by A Blogger at 4:38 PM 1 comment: